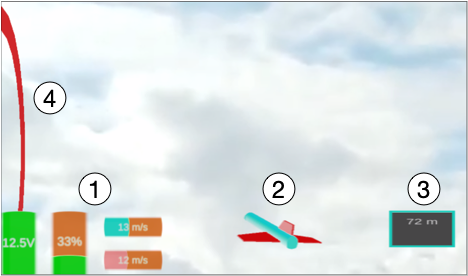 LIn collaboration with the UAVs systems team at ENAC we worked on several projects to support drone operations that rely on the Paparazzi UAV platform.

Where is my drone? Augmented reality glasses for drone’s safety pilots

Where is my Drone? is an Augmented Reality (AR) application that supports safety pilots in keeping the drone in sight and monitoring it in order to be able to regain control quickly if needed.The app is implemented as a head-up display working on AR glasses. The application displays important data such as the remaining battery, the altitude or the flight plan. Our application enhances situation awareness and reduces the too frequent communications between the security pilot and the ground station operators to monitor the drone status. The application has been developed by students during summer internships and several introduction to research projects.

Screenshot of the application

Handifly: an adapted and adaptable application for flying drones

HandiFly is an application to support pilots with disabilities who are flying drones as a leisure activity. HandiFly features several adaptations to leverage diverse physical and cognitive abilities of the pilots, on the hardware, software and automation level. On the hardware level, we experimented using different physical controllers to match the users’ motor skills, such as game controllers, keyboards or a DIY controller using makey makey. On the software level, we provided a Graphical User Interface that allows to easily configure HandiFly depending on each user’s needs, e.g. regarding the fine tuning of controls and the choice of physical controller. On the automation level, we implemented 6 piloting modes with different levels of assistance from fully automatic to manual control. This allows to simplify flying by restricting possible motions (e.g. limitation to a 2D plane, or turning off the yaw), and by (partially) automating the flight.This project was done by students during summer internships in collaboration with Fablab Artilect and the Elheva association.